The Seasons of Artificial Intelligence

AI has become a hot topic but it hasn’t always been like this. In this article, we look at some of the highlights in this field, beginning when the name ‘artificial intelligence’ was first coined.

Since the famous Dartmouth Conference in the 1950s, believed to be when ‘the birth of AI’ took place, things have evolved a lot in this area. If we zoom in on the journey this tech has taken, we can see several important milestones.

Of course, there are the more famous ones (like Deep Blue, DeepMind, AlphaGo) but also the lesser-known, equally important ones (like Bernstein’s Chess AI, Turing Test Contest, ELIZA). As these milestones were met, they fostered various imaginings of what this technology could do, inspiring new generations to believe in the power of AI. Whether for the better (believing that AI will empower us with an unbeatable level of computing prowess) or worse (by thinking it will render us useless and replace us entirely)!

In the beginning or ‘spring’ of AI in the 1950s, the world was introduced to Alan Turing’s test for machine intelligence. This is also the time when John McCarthy (considered by many as the father of AI) used the phrase ‘artificial intelligence’ for the first time. It was an exciting period, where the imagination of researchers was the only limit.

Soon after this, a big investment was made in the game-playing capabilities of AI, with machines that would play chequers coming first, followed by those that could play chess. Game ‘problems’ like the ones posed in chess provided an excellent test bed for the first approaches of knowledge representation and reasoning. These are actually the cornerstones of AI, though not many people realise this.

Another highlight from this early era of growth was ELIZA, the first bot famous for being able to have a conversation with humans, even if it was mimicking a psychotherapist. And then, as a final hurrah as the season moved on, came Kaissa, the first computer chess champion of the world.

After this bountiful spring came dark times for AI, called ‘the AI winter’ by many. There were few highlights and few visible achievements. Investment was lowered, mainly because AI was not trending anymore.

The expectations that this area and its founders hinted at were not met, at least in the time frame that most people wanted, so this disappointment gave rise to a bleak era where the AI furnace seemed to stop glowing. However, during this quiet period, steady research work was taking place that would enable several foundation level algorithms and approaches to later be created.

After the dark days, came another beautiful spring in the early 1990s when things started to look up for AI. Several advances in the area of neural networks and other machine learning techniques took place. Although often forgotten as such, machine learning is historically a sub area of AI rather than a synonym. This is true of many other areas of this field that started to emerge strongly in the late 1990s. These include expert systems, natural language processing and, in particular, robotics.

Around this time, alongside KISmet by MIT and AiBO by Sony, the first big highlight of the new season hit and it was called Deep Blue. This famous AI system, developed by IBM, was able to play and defeat the human world chess champion at the time, Garry Kasparov. A very impressive feat!

After this, summer finally came for AI and the golden season began in 2011. Several famous systems were developed by big tech companies, like SIRI by Apple, Watson by IBM, Alexa by Amazon and Google’s AlphaGo, a board game-playing AI system able to beat another world champion!

This time, the hype around AI was different, like a perfect storm, and several factors came together: computing power was available to satisfy the intense needs of most of the AI approaches; data had a dimension that enabled machine algorithm approaches to be successful in solving real world problems; and above all, real financial investment was being made by big companies like Google, IBM, Apple, Microsoft, Amazon, Facebook and others.

Even today, we’re still enjoying this golden period with AI appearing in the headlines constantly. This is great since it has encouraged higher investment by companies and organisations of all sizes. Several successful systems – like expert systems (systems that help doctors diagnose disease for example), autonomous driving systems, and computer vision and reasoning systems – continue to be deployed, tested and improved, enabling huge advances in several areas of AI. 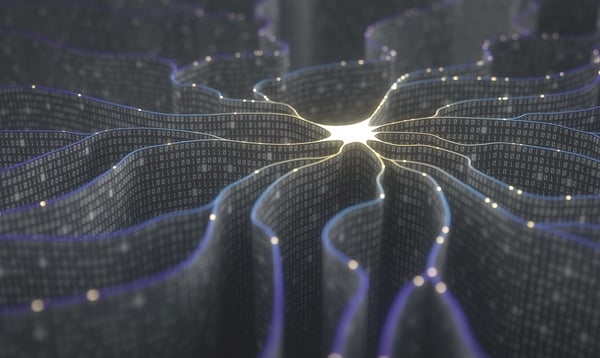 This popularity also gives a big boost to companies selling AI-based systems or services. Unfortunately, this has also highlighted a lack of developers available to work with this emerging tech who can apply real-world expertise.

This lack of resources hasn’t improved yet, mainly due to the fact that AI has so many distinct sub areas. It’s common for a developer with AI experience to specialise in just one or two areas, with fewer mastering three or more. But, with this level of demand and more young people embarking on careers in this field, we will get there!

So, what does the future hold for AI overall? One thing is certain, AI development won’t sit still. Business needs and other drivers will ensure that doesn’t happen!

As for expectations, AI is enabling systems to interact with us in a more intelligent, efficient and effective way, so I think we can look out for some exciting developments fairly soon. Automation of basic tasks has already been achieved with robots so the next level is likely going to include more complex tasks, like engineering, driving and providing decision support. Handing these tasks over to an intelligent virtual assistant will make our lives much easier.

Something that will impact the future of AI is the way we as developers are pushed to perform more creative tasks with this technology. We are always exploring what AI can do and by doing so, I think we’re also going to get more creative when it comes to solving the challenges AI presents. It’s a positive circle.

Perhaps the golden season will continue with ‘thinking creatively’ being the next big frontier for AI to conquer. Having a conscience and becoming self-aware are things that enabled humans to evolve cognitively, so perhaps we can expect the same of AI: to evolve to a new level of intelligence… Whatever that means!